Skip to content
When you buy an item using one of our links, we may earn a portion of the sale. SteamCleanerMaster and some products featured on the site are owned by the same company. Learn more.
By Steam Cleaner Master | Updated January 13, 2022

The Shark Lift-Away Pro Steam Pocket Mop is an inexpensive solution for homeowners who are looking for a multi-use steam mop. This mop is maneuverable and will do great on light-medium duty jobs around the home. 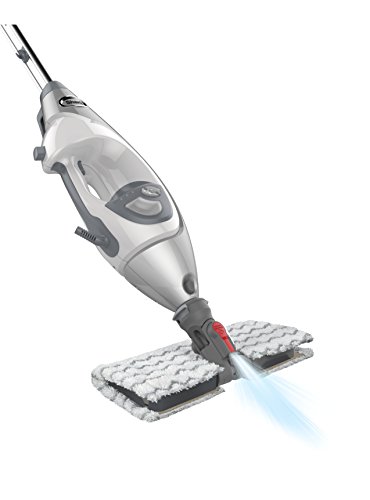 “Whether you need to blast away tough stains, sanitize* sealed hard floors, or convert to a portable handheld steamer for above-floor cleaning, the Shark® Lift-Away® Pro Steam Pocket® Mop can do it all. It has next-generation features like 3-setting Intelligent Steam Control®, an Intelli-Mop™ Head with Steam Blaster™ Technology, Touch-Free Technology, and a Direct Steam Channeling System, making cleaning simple, quick and easy. It also includes double-sided Dirt Grip™ Pads and Lift-Away® accessories for above-floor cleaning.”

What leaves your floors so much nicer than regular mopping and scrubbing? Steaming every day is what does the job.

With the Shark Lift-Away Pro Steam Pocket Mop, you blast off difficult stains, clear hard floorboards. An easier and more natural cleaning method, it works well so long as the surfaces being treated are sealed against dampness.

Hot vapors dislodge dirt and grime and sterilize things all at once, while messes are absorbed and lifted up by the fabric pads of specialized steam mops. Since detergents are not required, the treated areas will end up smelling fresher.

As a more modern method of cleansing that is safer for kids, parents have taken to its advantages in droves. Hard-surfaced ground and fixtures are ideal for steam cleaning, tiled and slate floors and counters will end up drying quicker after a pass.

For convenient above-floor steaming, you can switch to the handheld steam cleaner at the core of this flexible design. A variety of places around the home can be safely treated, including shower and bath areas, kitchen countertops and cabinets, and appliances.

This upright steam mop offers a good blend of ease and capacity in its direct steam channeling system and heavy-duty cleaning pad.

Putting its advanced features to good use, you will be able to handle even the toughest stains with bursts of steam, all while eliminating some 99% of harmful microbes in the process. Afterward, you release the dirty cloth with a simple press of the button.

Since only minuscule volumes of moisture are left on the ground, what is left is readily taken up by the attached cleaning pad or else speedily evaporates. Hard surfaces including marble, tile, and slate, as well as linoleum and laminate floorboards,  will be left dry in less than a minute.

It is usually best to vacuum the ground first, to avoid gathering wet dirt and hair. Distilled instead of tap water is preferred, as the latter may lead to mineral deposits that will clog the internals over time.

Laminate floors can stand infrequent spills, but do not forget that you must take care when it comes to wooden flooring. Too much wetness can soak through cracks and damage the laminate cores. This presents less of an issue with seamless floorings, such as linoleum and vinyl.

Sealed wooden floorboards can be steamed lightly with no issues if each pass is not continued for too long. Try using a microfiber dry mop in turn between steam cleanings. It is the safest way to dust laminate and wood floorboards and can supplement a steaming routine nicely.

2-in-1 versatility and smart operation

The slim housing is easy to move around furniture and corners as you go. The handheld steamer at its core is detached by pushing on the release button while tugging it off its cradle. Aside from a steam release switch, streams can be adapted to low, medium, or high levels.

The 22-foot-long power cord is long enough to get to most wall outlets. Once the mop head is folded, the entire unit can be stored in almost any tall closet. The quick-release mechanism is helpful for letting you avoid handling the pads once dirty.

Laminate floors, in particular, can be treated safely using the Light low setting, although more encrusted gunk may require Scrub with the highest steam output. Steaming is not all that sensible on unsealed flooring and furniture, though.

The package comes with a single 13 x 7-inch ‘Dirt Grip’ pad made of very absorbent fabric. This slips over the double-sided head, which inverts on its shaft mount to expose its opposite sides as needed. The pads wash nicely and you can get much usage out of each, across multiple cleaning cycles.

The head is designed to unfold into two sides on its swivel, with the latch open. Flipped towards the rear, the direct channel get exposed and will let out blasting steam; flipped forward, it outputs less. Since the machine runs rather quietly, you will not disturb the rest of the household while it working.

The technique can be used on areas and fixtures above the ground, such as bath walls. For this purpose, you deploy its core element as a handheld steamer. To detach it, you push on the release button while pulling the smaller steamer unit up and out from the front of its housing.

With any needed attachment installed, it is best to moderate its output by triggering short bursts of steam, to extend the operating time and gain more control.

When you are done, you press the same control knob until it turns blue and returns to standby. You will need to wait another 3 minutes for things to cool down, especially if you will disassemble and store everything.

The Scrub level is meant to be present in Handheld Mode, to better optimize the steamer for above-floor and also garment steam cleaning. The steam blast channel can be opened to assist in dislodging stains, there is also an integrated scrubber edge on the other side for tackling stuck-on messes.

Other accessories are included in addition to the rectangular ‘Intelli-Mop’ head, including an accessory hose, triangular head with ‘Dirt Grip’ scrubbing pad and scrubber face, an above-floor pocket nozzle with scrubbing pad, garment steamer with bristle head, and a filling cup.

The standard rectangular pad is good at lifting dust and hairs, while the triangular version is just great for clearing out corners and other hard-to-reach spots. Compatible replacement types are available at most big hardware stores and online sellers.

Do note that the boiler cannot be left running unattended as excess moisture may eventually condense into pools of water. Also, just enough water is stored for some 20-30 minutes of operation at most. A larger capacity would have enabled much longer steaming sessions between each refill.

To open up the mop head, lift its shaft straight until it is hanging directly over the center of the pad. Push the release knob at the side and both sides will fall open and onto the fabric.

Slip each corner tab into the corresponding corner pocket of the pad. After securing the cloth, carefully press the head down onto the ground on both sides, to latch each into place. To release the pad, simply engage the same release knob, both sides will unfold and nicely shrug off the dirty pad.

After you have plugged the cord into a wall outlet, the blue steam control icon will flash. Attachments are fixed into position with the latch knob. You will not need to put your weight on the pad, as the flow of steam will do most of the work.

The boiler produces steam within a minute from a cold start. Controls for steam release and level adjustments are located on the detachable handheld steamer.

The desired steam level is set by pressing once for the Dust setting, twice for Mop, and thrice for the Scrub, while a fourth press engages standby mode. The highest setting able to tackle most stuck-on dirt and oily messes, with some scrubbing for the worst spots.

‘Blast’ operation is intuitive. For a stronger flow, you just flip back the mop head behind the housing, which directly exposes the steam channels. You then tilt the handle backward to discharge concentrated steam, tilt it forward to get back to regular steaming.

The amount of blasting power depends on the level you have set, the lower Dust setting will, therefore, provide less blasting ability than Scrub, the highest. Most often, treated surfaces will be drying in under a minute and with hardly any streaking.

You will need to find something to lean the shaft on, as the housing cannot stay upright by itself. You cannot lean it against just any counter either, as the handle tends to flop over. On bigger jobs, you will be constantly waiting for the tank to cool off prior to opening and refilling the tank, and pausing again as the boiler generates more steam.

The design obviously exchanges steam duration in exchange for portable and efficient operation. But, the small water volume should be enough to work the average bath or kitchen.

What do customers say on the web

Many users found the blast channel effective for displacing encrusted dirt and tough old stains. It seems the general response to such capabilities is “Love this product!”

Many users liked that the steam mop is easily deployed and that the triangular attachment featured both scrubbing and fabric sides. One user exclaimed, “the entire purchase of this mop was worth it just for that attachment!” ”

Homeowners get to finish their cleaning chores faster, it helps that the shaft does not need to be pumped to generate steam. Neither must it be leaned on to deeply scour soiled areas. One homeowner felt that it was the “Best floor cleaning unit I have ever owned.”

The Shark Lift-Away Pro Steam Pocket Mop has a raft of favorable user reviews on its Amazon page, gathering 4.5 stars out of 5 on average at the time this article was published.

A relatively small issue is that the latch button for releasing cleaning pads is located lower down the body. However, many users of Shark’s dual-sided mop heads note that this is not that big a deal when attaching the pad since you must still reach downwards to fix it in place.

Shark’s Lift-Away Pro cleans hard ground and above-floor surfaces conveniently and easily using the sanitizing effects of steam. Its advantage over rivals is that its smart design emphasis convenience and flexibility in everyday use.

The steamer heats up in under a minute and maneuvers competently around the room. The operating core can be detached for cleaning a range of walls and fixtures high above floor level. Multiple flow control allows for greater control and economy, with the lowest setting safe for steaming solid and laminated wood floorboards.

Those with larger homes will still find this model to be one of the best steam mops around, even though its runtime is average. The effective operation, handheld flexibility, and versatile outputs and attachments make it a good addition to any disciplined household.

The Shark Lift-Away Pro Steam Pocket Mop features flexible steam flow and channeling and quick-release pads and is good for refreshing and sanitizing hard floors and kitchen and bath counters. The additional versatility afforded by the detachable handheld steam unit can only enhance this model’s everyday good performance and usability. 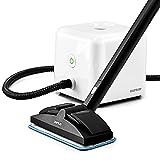 Hello, My name in Angela and I'm obsessed with cleaning! Some say i'm a bit OCD but that's OK I guess. I have 2 kids at home and it's always a struggle to keep things clean.